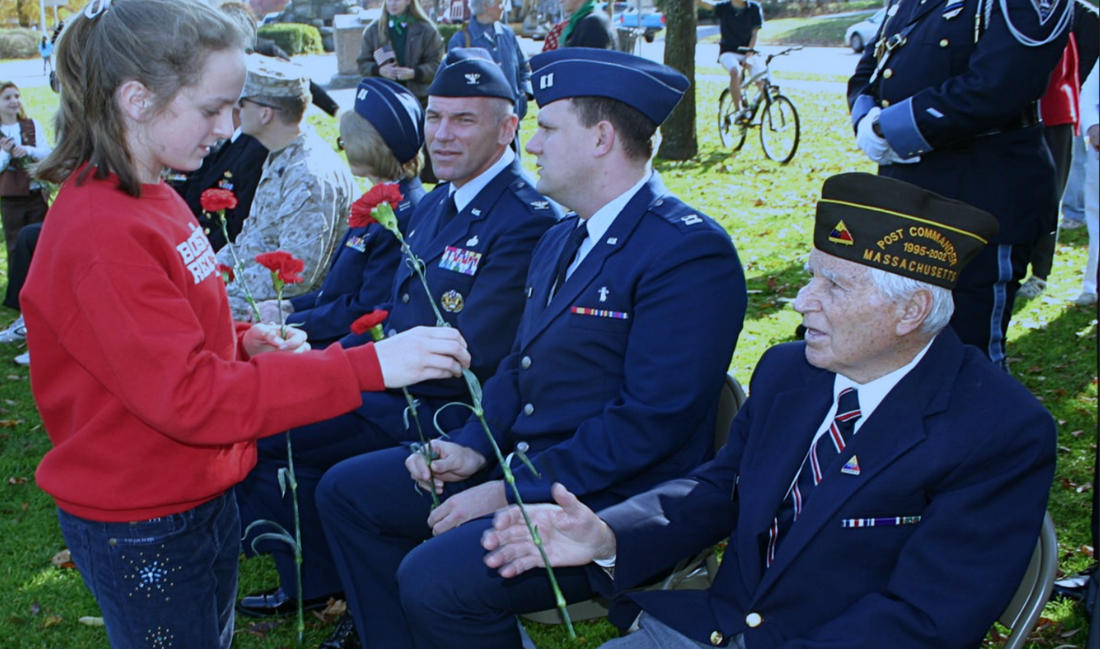 Lexington resident Paige Campbell presents Lexington veteran Aurio Pierro with a red carnation in 2006 in appreciation for his service to his country. Pierro was awarded a Silver Star and a Purple Heart for his actions at Petit Coo.

Aurio J. Pierro was born March 1, 1917, in Lexington, MA. Prior to joining the Army in January, 1942, he had graduated from law school. He was assigned to the 33rd Armored Regiment of the 3rd Armored Div. at Camp Polk, LA, in March 1942. He was involved in the “wet” landings at Omaha Beach in June, 1944, in which the 33rd’s water-proofed tanks were unloaded from LST’s in turret-level water. As a tank commander, Pierro saw action in the confined and perilous hedgerow fighting in Normandy. It was there for the first time his tank would be the intended target of a German bazooka. And it was there that for the first time he would hear on the radio, “Your tank is on fire”! It would not be the last.

Pierro saw far more than his share of front-line combat across France, Belgium and into Germany. He witnessed much in the way of death (including his own tanker comrades) and destruction. His most harrowing experience came during the Battle of the Bulge at the small town of Petit Coo, Belgium, as part of Task Force Lovelady (named for Lt. Col. William Lovelady, the battalion commander). SSgt. Pierro was a tank commander in “B” Company’s 1st Platoon, which was protecting a building at Petit Coo being used as a Task Force first-aid station.

On December 22, 1944, in the afternoon, Germans attacked Petit Coo with three companies of infantry supported by mortars. The 1st Platoon, which consisted of five M-5 Stuart light tanks, was forced to fall back or risk being surrounded and wiped out. There had been no choice but to leave the approximately half dozen wounded GI’s in the first-aid station with several medical personnel. One of the tanks, however,
somehow disappeared and was no longer with the unit. The whereabouts of the platoon commander, who had been in that missing tank, was unknown. Consequently, Pierro then took command of the four tanks.

He had his men form a defensive position at a bridge within sight of the station and surrounding buildings. The bridge crossed over a small river and railroad tracks, and, although unknown to the tankers at the time, the German infantry had needed to secure that bridge to allow their reinforcements to reach a German task force lead by the infamous Col. Piper. But at this point, their infantry advance was now stalled at Petit Coo. The quicker, lighter Stuart tanks, with three .30 cal. machine guns and 37mm cannon with an anti- personnel buck-shot load, were more feared by the infantry than the Sherman’s.

With the sun going down, and the GI’s in the aid station now being prisoners, Pierro radioed Battalion with the situation. Orders came back to stand his ground and wait for an American infantry unit that would arrive and join the tankers in re-taking the station and that section of the town. It was well after sundown when the infantry arrived, but they were only about fifteen riflemen from the 30th Inf. Div. There would be no chance for sleep, as the platoon’s counter-attack was to begin in darkness, with the Germans least likely to expect it.

Suddenly and without warning, Pierro’s tanks charged toward the station, with the riflemen riding on top. The two lead tanks were abreast, each blazing its machine guns at buildings on the nearest side of the road, and setting several on fire. As the platoon neared the first-aid station, Pierro moved his lead tank ahead and rumbled to a stop in front of the building. Armed with a .45 pistol, he climbed down from the tank to enter the station. As he did so, the projectile from a German bazooka exploded close by. Shrapnel from the blast struck Pierro in the back and knocked him to the ground. Somehow not seriously injured, he climbed back in his tank, as sustained German bazooka and small arms fire was coming from three sides. 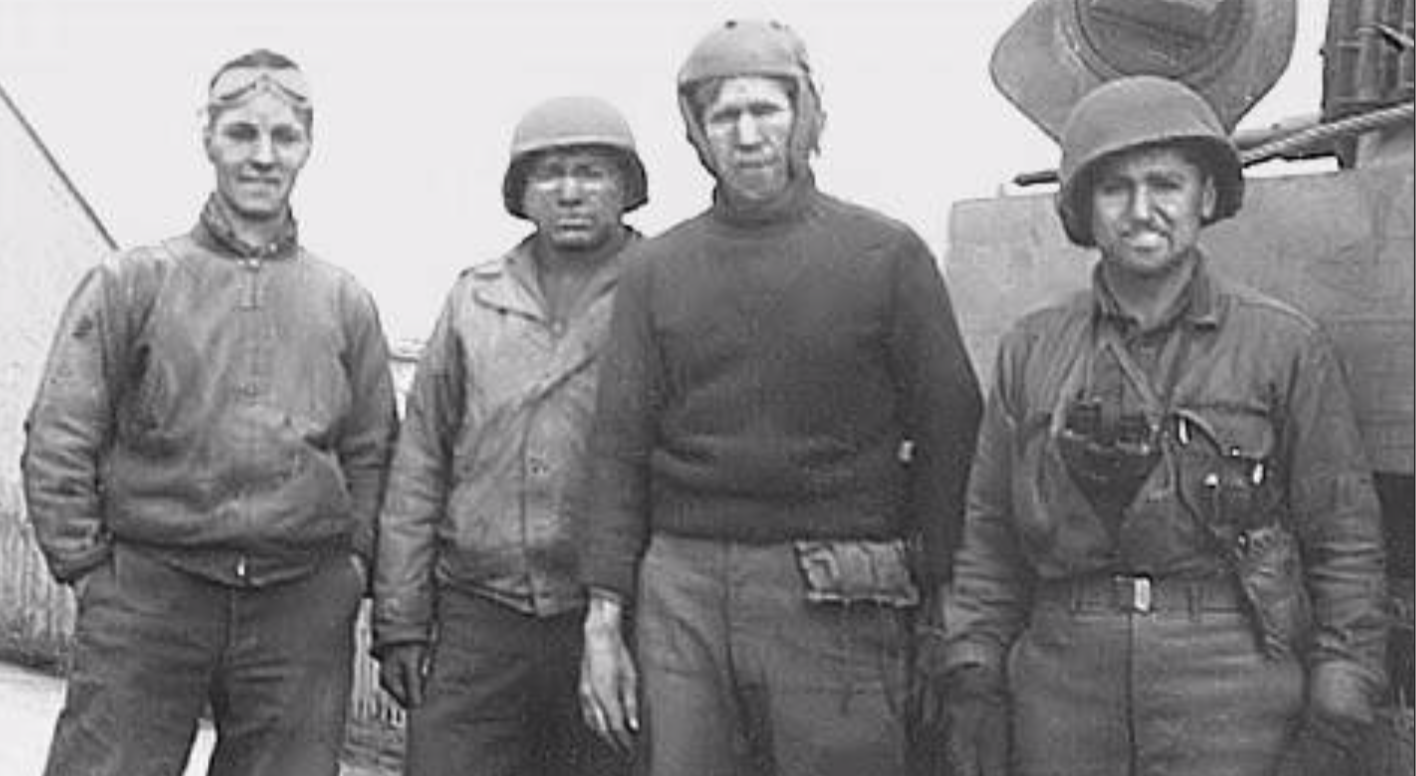 Pierro’s tank crew in March 1945: (left to right) Charles “Jr.” Van Fossen (driver), Oliver “Chief” Vowels (asst. driver), Luther Sexton (gunner), and Pierro (tank commander). Some weeks later Sexton became a tank commander and was killed in the attack on Raguhn, Germany.
A number of smokey fires, while miraculously not sweeping through the whole structure, forced the Americans (and their POW’s) to move to the cellar. Somehow none of the group had been killed, although the Germans probably assumed that there were many casualties inside. In this large, dark cellar, with no view out except through a rear door, they knew that this was where they would make their last stand. The fire and smoldering above in the building was continuing. They had no food or water.

It can be assumed that the Germans could not understand how many GI’s were still fighting in the building or where they were all located. But eventually, after daybreak, a shout came from outside the rear cellar door. It was in English and was effectively “You must surrender! This is your last chance!” There was no response of any kind from Pierro or his men, which probably befuddled the Germans. Firing from outside continued, but only sporadically. This continued past mid-day, and, with no radio available, Pierro had no idea if relief was on the way.

Finally, Pierro dashed outside the rear door to see if the radio was operating in the Stuart tank still parked there. A dead German soldier lay next to the door. In disbelief that no one had shot at him, Pierro climbed in the turret. In more disbelief that the Germans had not destroyed the tank’s interior, he was able to reach Battalion HQ on the radio. He was authorized to evacuate the station whenever possible. This meant escaping by way of the railroad tracks that lead behind the building and toward American lines. Pierro then returned to the cellar, still apparently unnoticed by the Germans.

Within the next hour, shooting outside had ceased. Although the town was still under enemy control, the siege on their position, incredibly and unexplainably, seemed over. The group prepared for their cautious dash out the rear door into daylight. Except for the several seriously wounded and the POW’s, they began their escape -- about twenty-five men total. Tragically, a distant machine gun from some unknown position opened up on the lead men in the group. At least three GI’s were killed, and several more were wounded from what turned out to be friendly fire from an American unit that had just arrived at the bridge. Still, Pierro and most of his party made it to safety away from the town.

For his actions at Petit Coo, including bravery under fire, the survival of most of his men, and the tying down of a significant enemy force, Pierro would receive the Silver Star and Purple Heart.

But the war had a long way to go, and after removal of some shrapnel at a first aid station, Pierro drew another tank and with an entire new crew. Off they went toa new assignment. After his lieutenant was wounded just outside Marburg, Pierro again took over the 1st Platoon and remained in command to the end of the war. He had been recommended for a field commission as a lieutenant, but, by the time the commission was approved, he would be on his way back to the States. At that point, of the entire original 1st Platoon that had landed at Omaha, Pierro was the only one who had not been killed or seriously wounded.

Now Aurio Pierro is retired and living in Lexington, MA, having practiced law for over fifty years. He is the President of the New England Chapter of the Third Armored Division Association (WWII veterans) and is the Commander of the Lexington VFW. He is also Chairman of the Republican Town Committee (2003). He enjoys gardening and is an avid hunter.

This article was reproduced with permission from the U.S. 3rd Armored Division History website in honor of Veterans Day and Aurio Pierro’s service to his country. It was compiled by web staff from Division PAO and interviews of Aurio Pierro and Alfred Bell. The site is full of interesting and moving historical accounts of the activities of the 3rd Armored Division. The website is www.3ad.com. ​​
This website, Lexington Remembers WWII, is made possible in part by a grant from the
Community Endowment of Lexington, an endowed fund of the Foundation for MetroWest.