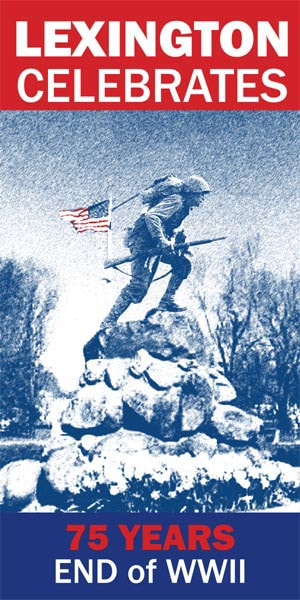 ​By E. Ashley Rooney
​
The Lexington Remembers committee has been working on finding the veterans from this war.  It was quite simple when we tackled WWI; we even had a plaque with names on it and trees to memorialize our fallen.  We had many pictures, but WWII was different.

There were no pictures of would-be recruits standing on the Green ready to go to war.  There was no list of those who went. And there were several plaques (one in the Library, another in LHS) of the fallen, but they had different names and different counts.  Perhaps that is because The Pearl Harbor attack pushed an unprepared country into a terrifying new brand of warfare. Soon after the Japanese attack, German U boats were sinking hundreds of US merchant ships- some right off the American coast. In the Pacific. Japan’s forces far outweighed those of the United States.

The committee has been compiling the list of Lexington WWII vets and developing an eAlbum of the 59 fallen.   We have found some wonderful stories.  There was John Ayvazian, who volunteered for the draft in 1943. “When I was getting on the train to go to Ft. Devins, I was laughing, and my mother was crying. It was a big adventure for me. I always wanted  to get into the Air Force.”

John became a navigator at a base northeast of London. Every group had three squadrons; every squadron had twelve bombers.  Sometimes, there were over 2000 planes in the air. John flew B17s and B24s.  “I didn’t have time to get scared. The only time I got jumpy was when we started off on a mission. Of course, our nose gunner never fired his gun when I expected it. So to this day, I still jump when there’s a loud noise behind me. Basically, the only way I saw anyone getting hurt was when a plane would get hit. A plane would break up into three balls of flame. We were instructed  to watch for a parachute.”

Chuck French, who is supervising the Committee’s research, comments, “We found a male Canadian national living in Lexington who got his pilot’s license before he was old enough to get his driving license.  He joined the Royal Canadian Air Force.  We had one female Canadian national who was raised in Lexington. She tried to join the service in Canada, but they were not accepting women, so she joined the WAVES.  One of the stories we have from the VFW archives stated that 60 women from Lexington joined the military.  That last time I counted, we have the names and records of 53 of them.” One was William W, Stevens an Aviation Machinist Mate from 77 Brant St. He was the only Lexingtonian (we have found) who served on the  USS Lexington.

In the course of compiling the list of “Lexington WWII vets, the committee discovered there were two kinds of Lexington vets:  Those that had just graduated from LHS and those that moved to Lexington after the War. As a result, the committee has compiled three lists.  To the best of our knowledge, there are 59 residents who joined the military and did not return. With the blessing of the Selectmen, we are raising funds to place a plaque next to the WW I plaque in Cary Hall.   There is a list of 1,422 Lexington residents that served in the military during WW II and an additional list of 36 vets that moved to Lexington after the War. In addition to this list, there are over 50 video interviews under “Lexington Remembers” on Youtube.com.  We are continuing to add to this collection with WW II veterans and Lexington Homefront interviews.

If you have any information, photos, or other “treasures” that you want to share to honor your relatives? Please join the Lexington Remembers WWII Committee on March 11, 4-6 PM, Lexington Community Center, Room 237.

We are also seeking stories from “The Home Front” and from those who survived and came to live here.  For more info, contact  WWTWOLexington@gmail.com.
This website, Lexington Remembers WWII, is made possible in part by a grant from the
Community Endowment of Lexington, an endowed fund of the Foundation for MetroWest.