World War II involved more than 100 million people from more than 30 countries. Marked by 70 to 85 million fatalities, it saw the genocide of the Holocaust, strategic bombing, massacres, premeditated death from starvation and disease, and the first use of nuclear weapons.

After World War I, many Americans did not wish to be involved in another costly international conflict. Although Nazi Germany had pervasive anti-Semitism, annexed Austria, and had moved against Czechoslovakia, in 1935 the US Congress passed the first Neutrality Act (Senate Joint Resolution No. 173) in response to growing threats. The Act was renewed in 1936, 1937 and 1939 to limit US involvement in future wars.

In January of 1941, President Roosevelt introduced the lend-lease program which was a way for the United States to help Great Britain fend off Hitler’s advance while becoming only indirectly involved in the conflict. Congress passed the Lend Lease Act where the United States would lend, rather than sell, military supplies to Great Britain for use in the fight against Germany. Roosevelt said, “Suppose my neighbor’s home catches fire, and I have a length of garden hose four or five hundred feet away. If he can take my garden hose and connect it up with his hydrant, I may help him to put out his fire…I don’t say to him before that operation, “Neighbor, my garden hose cost me $15; you have to pay me $15 for it.” I don’t want $15–I want my garden hose back after the fire is over.”
​
With Britain facing Germany in Europe, the United States was the only nation capable of combating Japanese aggression in the East. On December 7, 1941, 360 Japanese aircraft attacked the U.S. naval base at Pearl Harbor, surprising the Americans and claiming the lives of more than 2,300 soldiers and sailors. The attack served to unify American public opinion in favor of entering World War II; the next day Congress declared war on Japan with only one dissenting vote. On December 11, Germany declared war against the United States. 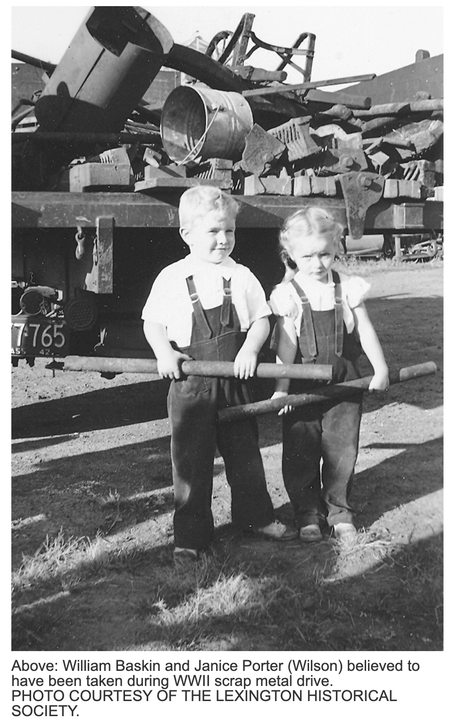 LEXINGTON DURING THE WAR
In May 1940, Lexington’s population was 13,113. Although many of Lexington’s farms began to decline in the 1940s, the town continued to prosper.
With the outbreak of the European war, Lexington formed a Civilian Defense Committee believed to be the first in the nation. As time went on, the committee’s name was changed to Committee on Public Safety, and it manned a central reporting center and an Airplane Warning Post established on the grounds of what is now Lexington Golf Club. It was the first warning post established in the country and first one manned 24/7.
Once Congress declared war, a number of LHS seniors left school to enlist. Over 1416 men and women from Lexington served overseas in every branch of the service. Approximately 60 died.
This website, Lexington Remembers WWII, is made possible in part by a grant from the
Community Endowment of Lexington, an endowed fund of the Foundation for MetroWest.