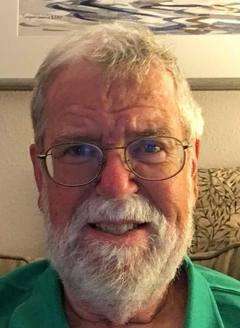 "I've been a lover of art all my life," says Harry Forsdick, but he only admits to being an artist - his own special kind of artist - since 2017.

His art can be seen at the Community Center from Nov. 4 to Dec. 31 with a reception 5-7 p.m. Nov. 16 in the exhibit space on the right-hand side of the second floor as one comes in the entrance.

His artworks at first appear to be watercolors, but Forsdick says, "No paint passes my fingers, but I call them paintings."

He begins with a photograph and then uses an iPad specific for sketching, the ProCreate program and an Apple pencil. He outlines the edges of the subject and adds color in a process that is his specific development.

"I worried people would think they are fakes, but then I realized Vermeer used a camera obscura. I never thought I had skills because I can't draw freehand. Then I was at an exhibit of Andy Warhol and Norman Rockwell paintings. Both used opaque projectors in creating their art," he continued.

He was encouraged to continue his art by one of his "Peet's pals," Linda Pollen, whose paintings hang in his living room.

"I took a drawing class at the library five years ago and then watercolor painting with Emily Passman," he went on. "I finally got over not being Passman or Pollen and now do my own thing. I'm more spontaneous now."

His prints on canvas look like they are right off the artist easel.

"I'm an 'attention-to-detail' kind of guy," he said, but added: "It's my mistakes that make my pictures interesting."

"I like to have an overarching theme," Forsdick noted. He designed his exhibit to focus on seven "topics" or themes - his trips to Cuba and Mexico, Cummington, MA where he and his wife Marsha Baker have had a second home for 30 years; Whitney Plantation museum near Wallace, LA depicting slave life; modes of transportation; Lexington friends and fellow Lexington Town Meeting members.

As you would expect, his Cuba series includes colorful older cars and the ocean plus two pictures of guards. In Mexico he was drawn to the architecture of the Palace de Arts, door fronts and the Airbnb they stayed in two years ago. He explained: "I look at an image and ask 'is this attractive to me?'"

His transportation series includes the No. 62 bus, a Boston trolley, a commuter train and The Ride.

His depictions of a slave child interpreted from a statue at the plantation and an old cart in a Cummington front yard are particularly memorable.

At Town Meeting he surreptitiously takes photos of others and converts some to his art. Those in the show are George Burnell, Nancy Adler, Joel Adler, Peter Enrich, Alessandro Alessandrini and Tom Griffiths. His "friends" grouping will feature Guy Doran, Elaine Doran, Sam Doran, Burnell and his doctor's office waiting room.

Forsdick paints in spurts. "I get obsessed with what I do. Right now I'm intensely painting, but I just finished a video of Lexingtonians who had relatives in World War I." That video can been seen at Cary Memorial Library or at http://tinyurl.com/LexWWI.

Harry and Marsha love to travel and take at least one month-long trip each year - last year Mexico, this year the South, "but these trips are really travel between art museums and artists' homes." They seek out smaller local and college art museums. "It's wonderful to find artists previously unknown to us," he commented.

Now that he's painting himself, he actually enjoys looking at art even more. "I study the way the artist painted. I study the details in a painting - how they were done and why they were included."

An artist isn't what usually springs to most people's mind when they think of Harry. "I went to Yale University and majored in engineering and applied science. I then went to MIT for graduate work in computer science." He was a computer scientist at Bolt Beranek and Newman in Cambridge working on the development of the Internet.

When he retired, he became chair of LexMedia's board of directors, was elected to Town Meeting and most recently joined the Community Center advisory committee.

Add listening to music to his list of interests. When asked if he had a guilty pleasure, he honestly added: "eating."