Lexingtonians Who Served:
​The Adler Family 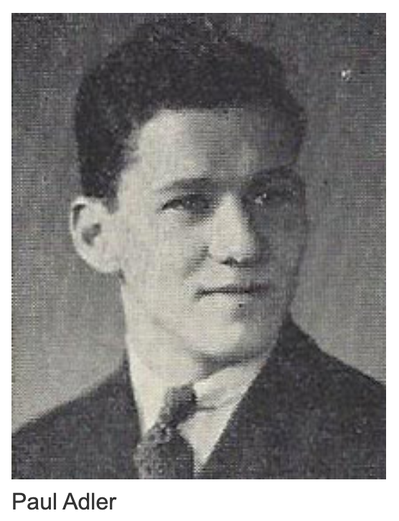 ​THE ADLER FAMILY
Twin brothers Paul and Karl Adler and their family moved to 16 Parker St, Lexington, in 1922. After a year, the landlord decided not to renew their lease because the twins had broken the windows in his chicken coop.   Grandfather Adler was able to purchase a home on Bedford St, and the children went to Hancock School (now condos).  After six years on Bedford St, the family of seven moved to 12 Berwick Rd., a house with only three bedrooms and one bathroom! Paul and Karl were accepted into Battle Creek Chapter, Order of Demolay.

In 1934, Paul became a Riding Academy instructor, which led to him hobnobbing with the Lexington Hunt Club. His equestrian abilities were so good that he was selected more than once to play the part of Paul Revere, riding from Boston to Lexington, a reenactment performed on July 4 during those years.   In May 1938, Lexington School Department Superintendent thanked Paul for training the Color Guards at the Parker (now condos) and Hancock schools. With his parents being unable to send him to college, Paul joined the military to better himself in June 1939.

During the attack at Pearl Harbor, Paul was in the US Air Corps as an Aircraft Engine Mechanic Instructor at Hickam Field, one of the Japanese targets.   He survived, married, and in July 1942, he and the 42nd Squadron left Hawaii for the South Pacific and the Battle of Midway. In 1943 as a crewmember of a B-17 aircraft, he departed from Guadalcanal on a bombardment mission to Munda when his plane disappeared. His infant son received his Distinguished Flying Cross, the Air Medal, and a Purple Heart in February 1943. Paul is one of Lexington’s 61 Fallen.
​
Karl Edwin Adler, Paul’s fraternal twin brother, was in the US Navy, trained in Detroit as a ship carpenter’s mate, spending time in Newport News, VA, repairing ships at the docks. For most of the war, he served on a tanker in the Pacific as it went on refueling missions. He was close enough in Tokyo Bay to see the Japanese delegation coming to surrender on the USS Missouri formally. He served on the USS Alcor and the USS Wisconsin.
Their older brother Robert Alfred wanted to be a B-17 Gunner because of Paul. He flew several missions over Germany, but because his inner ear was badly damaged, he was transferred to a tank and artillery unit. He landed at Utah Beach on D-Day, June 6, 1944. In 2001, he was awarded the French Government Gold Medal for his bravery in action in the Allied Forces march to free Normandy.
This website, Lexington Remembers WWII, is made possible in part by a grant from the
Community Endowment of Lexington, an endowed fund of the Foundation for MetroWest.